In February 2016 Outlander’s newly announced cast member Richard Rankin, who’s playing Roger MacKenzie, decided to take to trip Inverness and visit some of the places mentioned in the Outlander series. Richard took many lovely photos including this one at Culloden.

We’re delighted that the Outlander cast have taken it on themselves to visit the real Historical places mentioned in the book. So we thought that we’d give Richard the heads up about other places to visit and pointed him towards our blog.

He took our advice and the next day he went to visit the top locations in our list of places to visit while in the Inverness area. CLICK HERE FOR THE BLOG Richard went to the Wardlaw Mausoleum. 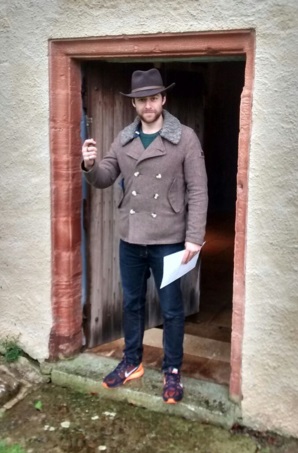 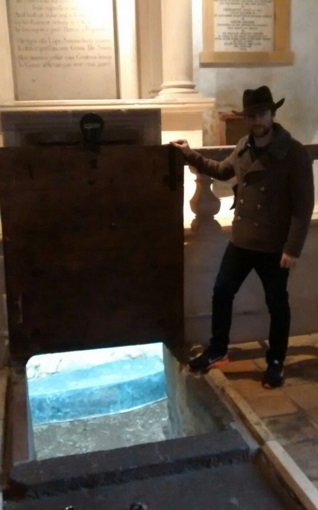 Richard enjoyed the experience so much that he brought his co star Sophie Skelton back to Wardlaw when she joined him in Inverness that weekend.

It’s so wonderful seeing the cast taking the same interest in the real Jacobite history that the Outlander fans do.

Since Richard and Sophie’s visit to Wardlaw Mausoleum a lot more people now know about it. We spoke to Diana in 2014 about Wardlaw and we weren’t surprised to hear that she already knew all about it and had visited it. This must have been before the restoration as Erik who looks after it had no idea what Outlander was when we first visited it early 2014. At that time he said that they probably got about two visitors a month. We let him know that that was all about to change and we’d help get the word out about this fascinating place. Wardlaw has now become part of a few Outlander Tours now and all the donations are helping towards the continuing restoration of this historic building. The Mausoleum is run by volunteers who do it for the love of it and to help keep history alive.

It has been disputed whether Lord Lovat’s body is actually in the coffin at Wardlaw as The Tower of London has him buried in their Chapel of Saint Peter ad Vincula but the story is that his body was swapped and brought home in secret to his family crypt. There’s only one way to prove that it’s The Old Fox in that coffin and that’s with DNA testing against the rest of his family who are in the crypt.

Because of all this interest on twitter Nicola MacAlley from @STVnews visited Wardlaw Mausoleum and did an excellent report on it . 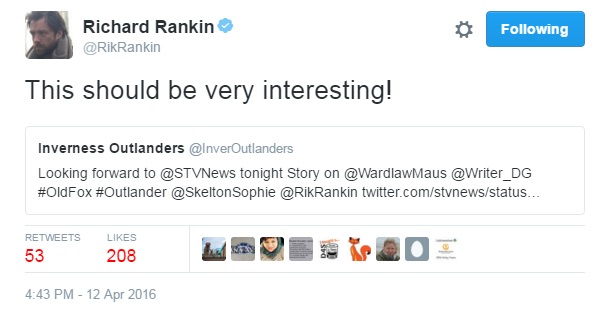 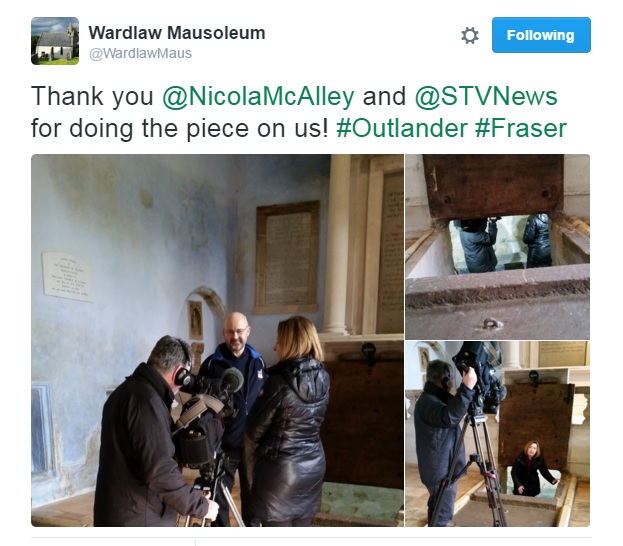 Here it is on the Scottish news

Professor Dame Sue Black from Dundee University visits Wardlaw and opens the coffin to try find out if its Old Fox in there. 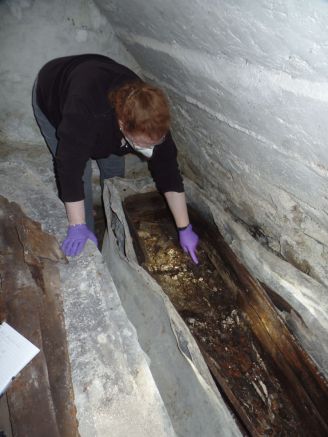 It’s just amazing what Outlander is doing for Scotland and for historic places of interest. Without Outlander fans with their interest in real Scottish history, generous donations, and spreading the word we would be still be in the dark about some of these fascinating places. Lots of non Outlander fans are going to visit these places because they’ve heard about them due to the interest around Outlander. Tibbermore Church in Perthshire ( where the witch trials in Outlander was filmed ) is another historic building that was struggling for money to do the restoration to keep the beautiful building standing. With Outlander and it’s fans help it will be standing for many more years.

The investigation into the bones begins

Today 500 people gathered in the Kingmills Hotel in Inverness to listen to Professor Sue Black deliver her results of the investigation.
The results came as a surprise it was the old Fox was not in the coffin the main remains were that of a 25-35 year old woman, this added more mystery to the Old Fox he’d foxed us once again.

Click the links below for reports in the papers

The remains found in The Old Fox’s coffin were reinterred at the Mausoleum . We were there to pay our respects . May all now rest in peace.

Click here to read the story in the paper
And the mystery continues ….who is the woman in the coffin ……

Clive Russell who plays the Old Fox in Season 2 of Outlander came to visit the Mausoleum with us .

3 thoughts on “The Wardlaw Mausoleum and The Outlander Effect”

Inverness fans of the Outlander books and TV series

Spread the News and Share the Most Awesome Story Ever Told

One lassie's views on everything Outlander

Cultural Musings of An Outlandish Nature

So you don't miss a single thing

This WordPress.com site is the bee's knees