Some of us decided that we wanted to the Midnight Torchlight Service to remember those brave men who fought at Culloden.  It was a lovely still and calm night and when we drew up at the car park the stars were shining brightly and not a cloud in the sky.  But as we started walking onto the Battlefield a strange and eerie mist started to surround us.  You are probably thinking we are making this up but look at the photos.  As I was taking them you could see the mist swirling in front of the camera.

Bagpipes were tuning up as the Torchlight Procession walked towards the Cairn.  Many of the men braving the cold by wearing their kilts.  Men talked about the build up to the Battle and how exhausted and hungry the Jacobites were after their failed attack during the night. People laid wreaths and flowers at the Cairn and paid their respects to all those who fell and were buried nearby. Needless to say when the bagpipes started it sent shivers down our spines.  They said a prayer to those brave men and told stories about acts of bravery including the story of seventeen Jacobites who were hiding out at a house before being taking outside and shot.  Does the story sound familiar? 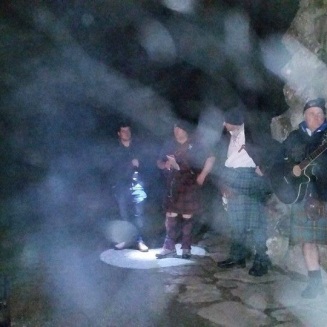 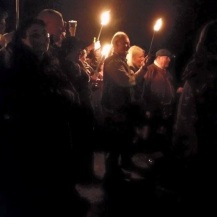 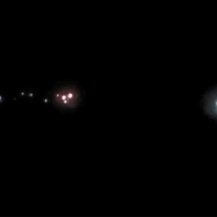 Then Ted Christopher sung a song about a strange incident while walking off the Battlefield at night a couple of years ago.  Click the link below to hear the song.  He even mentions the Frasers.

It really was an amazing experience and I am sure there were many there with tears in their eyes.

Inverness fans of the Outlander books and TV series

Spread the News and Share the Most Awesome Story Ever Told

One lassie's views on everything Outlander

Cultural Musings of An Outlandish Nature

So you don't miss a single thing

This WordPress.com site is the bee's knees